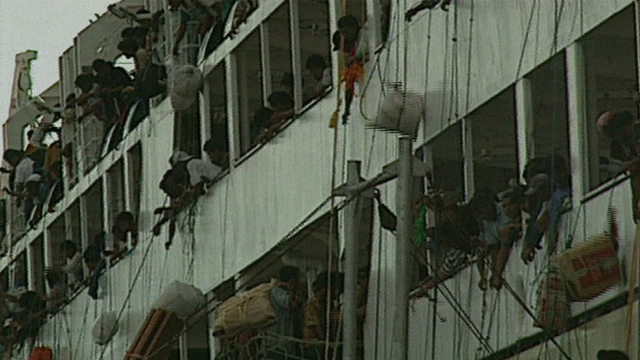 Indonesia is a country fraught with religious tension. This film looks at the outbreak of an all-out religious war on the island of Ambon.

It's no wonder inhabitants are risking their lives to leave a Place where there is so much death. Rare video captures a mob wielding machetes and fire-bombing houses. "I took out my sword and took off four heads," says one gang member. 50,000 Muslims gather at the dock to escape, clambering up makeshift ropes onto an overcrowded ship. Christians soon arrive on another boat, refugees from a different island. They are chased back to their ship. The army is all that stands between the factions. Many accuse local criminals of exploiting religious tension to gain power in the vacuum left by Suharto. The migration policies that forced the archipelago together are now falling apart, and the islands are left hanging together by a fine political thread. Produced by ABC Australia
FULL SYNOPSIS
TRANSCRIPT