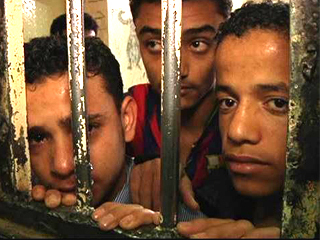 Yemen's death row houses many children awaiting execution. Their stories of abuse and forced confessions are heart-wrenching. But now Yemen's Children's Parliament are calling their adult leaders to account.

In the dark, grim cells of Sanaa Central Prison, hollow and tear-filled eyes stare through the grill with alarming despair. Nadim, 15 when he allegedly committed the crime, tells us of the torture he suffered before he confessed to premeditated murder. "They kept beating me with an electric cable until 1.30 at night, while I hung there." In theory nobody under the age of 18 can be executed in Yemen, but in a country with few birth certificates determining these young people's age isn't always easy. But the Children's Parliament, a unique organisation that allows child politicians to challenge their adult counterparts, are taking on the case of these death row kids. "We will stand by Nadim and innocent children like him, even if we have to camp outside the president's residence." Moaad's family offer him no support, following a conviction he strongly denies, because they fear a reprisal from the relatives of the murdered man. When asked why he thought three doctors judged him to be 16 and then changed their minds he says, "Bribes, by the adversaries." Yet the Children's Parliament has succeeded in putting a stop to 3 executions and Moaad hopes that he will be the next one.
FULL SYNOPSIS
TRANSCRIPT