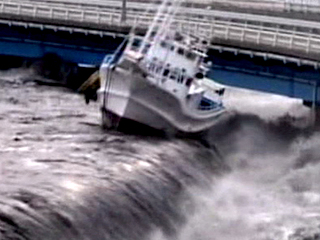 Taiwan doesn't seem to have learned Fukushima's lessons. They've built a power plant 40 km from an active faultline and 8km from the capital Taipei; and experts say a disaster could kill over a million.

Just along the fault lines of the Pacific Rim of Fire from Japan lies Taiwan - another heavily industrialised, modern economy highly reliant on nuclear power. Ninety percent of the world's earthquakes occur along the Rim of Fire, so no wonder there are worries about a fourth nuclear plant being built on these shores. "If the reactor core melted down...about a million people would die of cancer", says Hiroake Koide from Japan's Kyoto University. The government is promising to hold a referendum on its future, but if the reactor doesn't go ahead the country's nuclear strategy is in question, along with the $9 billion already spent on the plant. And the state-owned power company, Taipower, would face bankruptcy, leaving no one to manage Taiwan's nuclear waste. It currently sits across the water on the tiny Orchid Island, quickly corroding and risking potential disaster for the native Tao inhabitants. "More than 70,000 barrels. Even a leak in a single barrel, doesn't that pose a huge risk to us?" asks Lin Shih-Lan, a Tao leader. As fears grow, can the nation learn from Fukushima before it's too late?
FULL SYNOPSIS
TRANSCRIPT