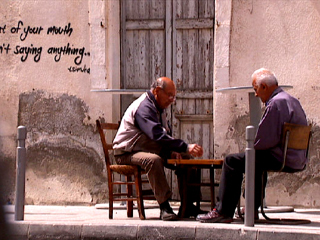 For the first time in the financial crisis, bank accounts are being raided and people's savings are being seized. We look at the fallout of the EU's cruel gamble, exposing the human cost that's devastating Cyprus.

In Cyprus the confiscation of bank deposits has been labelled 'the haircut', all too benign a way to describe what's happening. In return for 10 billion Euros of financial assistance, the European Union, the European Central Bank and the International Monetary Fund have applied a cut-throat razor. The cuts it has imposed will devastate Cyprus and undermine confidence in banking Europe-wide. "We had a gun to our forehead and were told we are going to pull the trigger if you do not accept an arrangement like this," Michael Sarris, Cyprus's former Finance Minister and the man who signed the deal, tells us. He says it was out and out bullying and if Cyprus hadn't accepted it, they would have had their economy smashed. But the outlook is pretty gloomy anyway. A few years ago Cyprus had full employment; economists expect in the coming months it could reach 35% unemployment. House prices dropped by up to 25% in one day. As the Cypriots watch their savings and their economy disappear before their eyes, they feel they are part of a very cruel experiment. "We feel we are being used as a guinea pig here. Europe wants to see if this will work and then they can do it in another place."
FULL SYNOPSIS
TRANSCRIPT