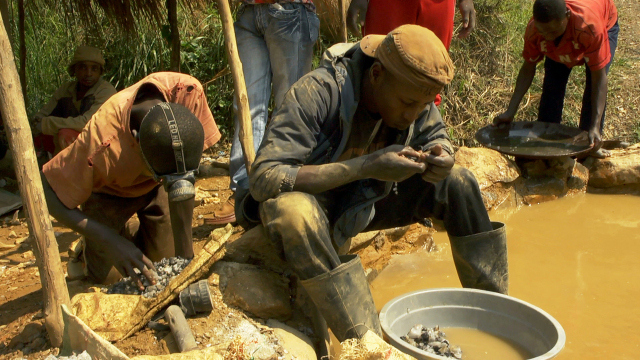 The harrowing plight of women and children in the Eastern DRC is exposed in this powerful short doc. Driven from their land, they work in mines as slaves in a desperate bid to protect themselves from rape.

"They came into houses and raped and killed children. They raped my two-year-old daughter," recounts Irene, who is now living in the UK. Since 1997, various militias have been fighting for Congo's vast mineral wealth in a bitter conflict for which women are largely paying the price. "Women are the biggest victim because they are raped every single day." Forced to work at gold and other mines in conditions of slavery, women are caught in the crossfire of competing militias who launder the minerals and smuggle them out of the region to be processed for manufacture by 'respectable' corporations. Despite the vast wealth generated by their work they eke out a meagre existence, sometimes being paid nothing at all. Meanwhile the rapes continue. With companies still not required to say where the minerals they use originate from, no one is taking responsibility. "They have to stop what is happening there. No one should suffer like that."
FULL SYNOPSIS
TRANSCRIPT