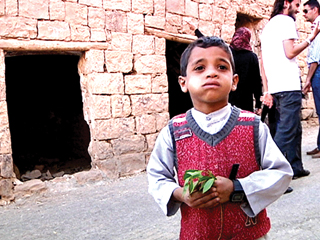 Is Yemen a nation on drugs? The entire country slows down each afternoon as people both young and old chew Khat leaves for a legal high. Meanwhile farms have stopped growing food and water is running out.

On the outskirts of Sana'a a young boy, no more than 5 or 6, sits on a low wall. "Do you chew khat?" He smiles a wide, empty smile, "Yes, every day." He's just one pint-sized representative of a country absolutely consumed by the drug. It's already having a massive social impact: "difficulty in sleep, irritability, up to severe psychosis and we also saw some cases of schizophrenia in people chewing khat". But just as worrying is the impact it is having on the country's resources, which is turning dangerous as farmers give up growing food in favour of khat. According to some estimates, the amount of locally grown food has dropped from 95% to just 8% in recent decades, alongside a worrying drop in the water table to irrigate the growing plants. The group 'Khat Free Nation' is making a stand against the drug, but in a country so hooked, even they wonder whether anyone will be able to turn the concerns into action. "It's over, brother, the whole population chews. Who doesn't chew?"
FULL SYNOPSIS
TRANSCRIPT