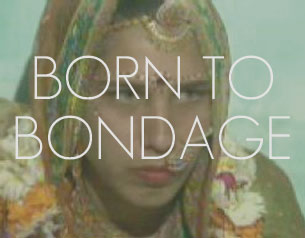 A report into India's forgotten people. For rural Indian women life can be unspeakably tough. Child marriage, incessant pregnancy, even rape are not far from the norm.

Meet Pasupathy, an 11 year-old workhorse. Every day she kneels at her factory bench, gluing together matchstick boxes at speeds almost too fast for the adult eye to perceive. At eleven she already understands her destiny well. "Everyone here has to work. We need the money." For every 1000 boxes she earns just 25 cents. Of the nation's 65 million working children, most are girls. Widespread poverty means families need to send their children to the workPlace and not to school. The state has tried to reverse this trend but without a vast injection of funds they can't hope to change the status quo. For those that get as far as the classroom, learning must play second fiddle to labour. "I'm always so tired in school. I'm always working... I've got no free time to play," whispers 10-year old Santosh Kumani. But to even make it past birth is a challenge in much of rural India, where families cannot bear the cost of dowry. To the strain of melodramatic sitars, a tearful mother hands over her baby girl whereupon her husband beats his progeny to death. It's a television scene that plays out the reality of female infanticide. A doctor slides his scanner across a young woman's swollen belly. Since 1996 it's been illegal for doctor's to tell the mother the sex, when the female foetuses became routinely aborted. Worldwide there are usually more girls born than boys, in India it's the other way around. The advent of ultra-scan technology has made the gender disparity even wider. In just one Bombay clinic they carried out 8,000 abortions... 7999 of them were female foetuses. Ultra-scan labs advertise their baby-sexing services with slogans like 'Rather 500 rupees today that 100 times that tomorrow for dowries.' The police come to inspect the scene of a woman's death. The charred remains of a sari lie on the ground. Accident or murder? Every year up to 5000 women are killed in disputes over dowries. And in a new consumer India - hankering after TVs and videos - the call for bigger dowries is getting louder. "Women are tortured because of their dowry...she's beaten to get more consumer goods from her family. If she's helpless then she'll be burnt alive," reports Swarmi Agnivesh, one parliamentary candidate campaigning for women's rights. The Police often don't investigate, classifying such deaths as accidents or suicide. But even official figures report one violent female death every 100 minutes. The lack of official support is giving birth to a new-found militancy. Phoolan Devi is the Bandit Queen. Her true story is enshrined in a classic Shekhar Kapur film - with flowing locks and cocked rifle Phoolan is a symbol of justice to thousands. For Phoolan took revenge. After being brutally raped by 22 higher caste men she led a gang who set about murdering her assailants, and any other men who challenged her. And after 11 years in jail she's now in parliament campaigning for women. "Women are people and not like bedclothes that the man can just use and throw away. If women in India don't finally get their rights, then I'm sure that soon all the girls and women will get hold of weapons." A dazzling blur of gold and red, a young bride awaits her passage to married life. While bands play all around and celebrations commence her eyes are filled with tears. "I'm not happy. I'm too young to marry. I want to continue school. I'm sad because I don't have any choice." The refrain of millions of lower caste women is the same - choices will never be a part of their lives. Produced by Marion Mayor-Hohdahl
FULL SYNOPSIS
TRANSCRIPT