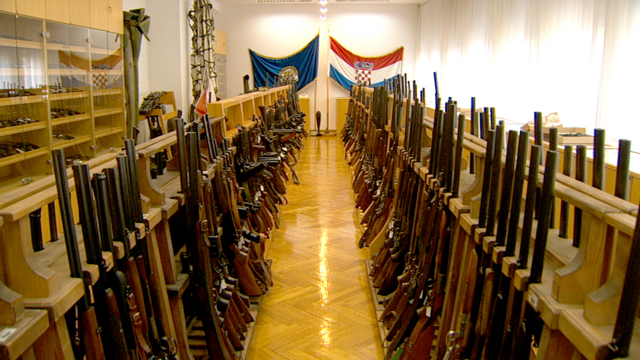 20 years on from the Balkans war and Croatia is still full of guns. And now they're being funnelled from under beds onto the black market. As Croatia enters the EU, will it spark an illegal arms trade boom?

"He is joking - we have enough for one more war!" A group of Croats sitting in the country's lush hillsides laugh knowingly at the suggestion that around here everyone has a few weapons stashed in the cupboard. But the armaments legacy from the Balkans conflict is no joke for the EU. During the war the country couldn't get access to enough weapons so small workshops around the country started up. According to an Interpol investigation, they never shut down. Already being traded for drugs in countries like France, Belgium and Germany, the guns are a problem because they're so difficult to quantify. "This weapon would be very popular with criminals because it is difficult to trace. No special features, no serial number," ballistics expert Damir Tomasek explains. The UN and local police have both undertaken large collection campaigns but neither have been that effective. This is partly due to continued production, but also because unlike the police, criminal gangs will pay for them. While Europe may be worried, the Croatians hope the EU will help solve the problem. "Co-operation from Europe is also very important. We can act against it much earlier through joint action."
FULL SYNOPSIS
TRANSCRIPT