The Military And Democracy

Indonesia's army and its grapple on power 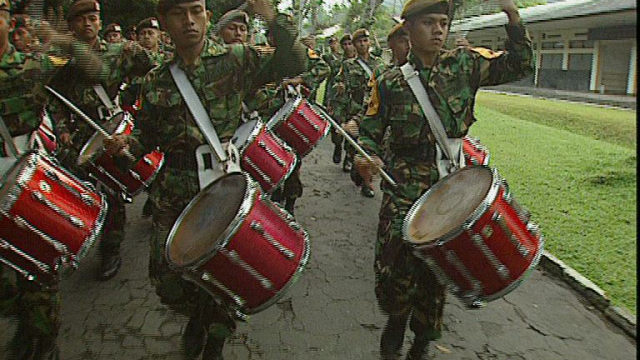 While the military remain fiercely unpopular in many parts of the country, it is unwilling to give up its political control.

Since Suharto came to power, the military has fulfilled its dual purpose with zeal: to be a military and social force in the country. Yet since the fall of the Suharto regime, and the killing of 40 civilians in a violent dispute between the army and Aceh separatists, the military are deeply mistrusted. The military are in a position to survive despite their waning popularity, still holding immense political power. They have reserved seats in the parliament, assist in the running of civil government, and can collect information on civilians that prevent them from getting jobs. There are those in politics who want to rid the army of their political control altogether, although they admit this is easier said than done: "All the parliamentary members must be elected through general elections, but it takes time so maybe the problem of dual function could be solved in like say six to ten years", says Amein Rais. Meanwhile, as the army continues to search for a missing officer, they are trying to change their public image. A detailed report on the military's power in Indonesian society, as a well a look into the issues facing 90's Indonesia. Features excellent footage of Suharto's takeover. Produced by ABC Australia
FULL SYNOPSIS
TRANSCRIPT