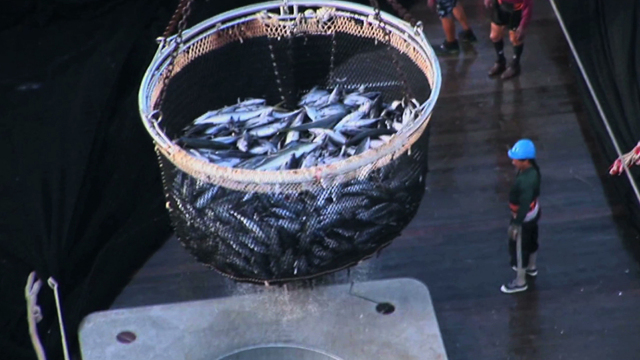 Tuna is being fished to extinction. Despite this, efforts to protect fish stocks are being undermined as legal loopholes on the high-seas have created a multi-million dollar trade in illegal catches.

"There is no chain of custody. As soon as the fish is inside the freezing vessel, it's impossible to know from which vessel it is coming", Francois Chartier of Greenpeace says of the controversial 'transshipment law'. It's one of the biggest loopholes in fishing legislation, which allows small vessels to transfer their catch to big freezing vessels. It means that out in the middle of the ocean, the lines are blurred over legal and illegal catches, with no way of tracking the fish passed between ships registered in several different countries. So while tuna numbers reach worryingly low levels, their stocks are not being protected. "The future for the Indian Ocean is pretty bleak. We've seen so many vessels chasing so few fish. The catches are dwindling." One fifth of fish are caught by huge ships that trawl the seas, catching fish such as tuna in bulk. It leaves little for local fishermen in their much smaller boats, raising concerns about the humanitarian impact coming down the line. As one authority on illegal fishing says: "We have to take measures to keep this fish stock healthy because for billions of people fish is their basic diet."
FULL SYNOPSIS
TRANSCRIPT