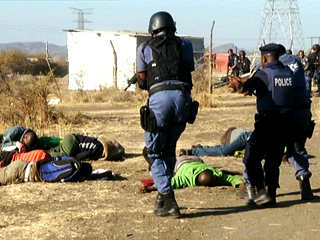 The Commission of Inquiry into the Marikana massacre is rapidly spiraling out of control, in a country where the government is accused of rampant corruption and over 9000 policemen face criminal charges.

A survivor of the Marikana massacre points to the bullet wounds across his body: "One, two, three, four, five, six, seven". Most of the bullets were shot into him as he lay injured on the ground. He had joined the 3,000 miners protesting against low wages when police opened fire, killing 34 and wounding 78. "I saw that apartheid was back. But now it was blacks killing blacks...", says Xolani Nzuza, one of the co-coordinators of the protest. The Commission of Inquiry into the massacre has been sitting for 10 months, dogged by delays and false starts. It's also proving to be dangerous to be a witness at the commission. Six miners have been murdered just before they were to take the stand. "It troubles us that workers who witnessed the massacre have no lawyers. If they are not able to be represented, it means there is no truth in this commission", says one widow.
FULL SYNOPSIS
TRANSCRIPT