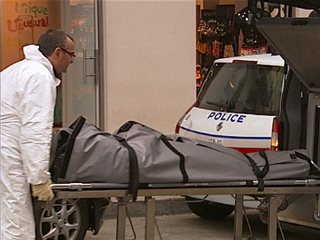 "We can no longer count how many people have died," says crime reporter Paul Ortoli. "Anyone could get killed at any time and anywhere." The list of recent victims in this killing spree includes some of the island's more powerful figures. The daylight murder of Corsica's most prominent lawyer, Antoine Sollacaro, has taken on a symbolic significance. The inadequately equipped law enforcement is headed by Mayor Ange-Pierre Vivoni. His heroic efforts to protect the island's natural beauty have made him the target of arson and bombing attempts. With 3 murders occurring in the time of filming this report, the leader of a protest group is angered by France's indifference to Corsica's plight. "The French Government is not interested in Corsica. We are nothing. That's why they leave us in the hands of the mafia."
FULL SYNOPSIS
TRANSCRIPT