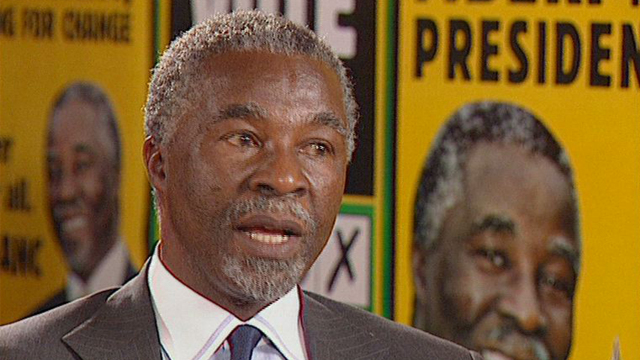 We take a look at the hopes and expectations when Mbeki took over the ANC leadership.

Mbeki is known as a practical man and is under no illusions about the task ahead. "You hear people saying, 'we want to live as the whites do...electricity, running water'. That's their vision." The burden of these expectations hangs heavy. On the campaign trial in Natal, Mbeki gets a heroes welcome, it's all smiles and cheers. Like the ANC faithful everywhere, they've transferred their loyalty from Mandela to Mbeki like flicking a switch. There's a sense that Mbeki is a new dawn. While Mandela represented the end of apartheid, Mbeki will be the deliverer from poverty. Such elevation to a 'a little God' as Mbeki puts it, is anti-democratic. "You want to produce the opposite reaction...to be able to engage the people." Mbeki has this sober eye on the challenges facing South Africa. Crime and the economic discrimination of apartheid are to be met head-on. Failure to do so would see the demise of the ANC and him. Produced by ABC Australia
FULL SYNOPSIS
TRANSCRIPT