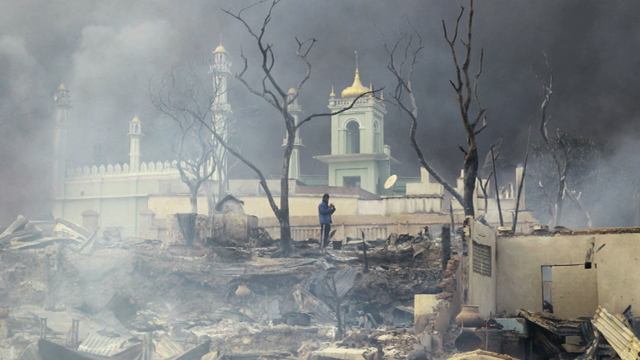 Muslims and Buddhists once lived in peace in Myanmar. But recent violence has left more than 60 Muslims dead. Some claim the attacks are being organised by the regime to undermine a transition to democracy.

In the street, rampaging Buddhists carrying clubs smash the furniture that's been dragged from gutted shop fronts. Flaming petrol bombs are hurled into homes and mosques. Muslims are brutally attacked: "They beat Dad with an iron pipe". The spiritual leader of these Buddhists who have turned their backs on non-violence is Ashin Wirathu, who preaches hate and intolerance towards Muslims and blames them for the violence. "They target women every day and rape them. Do we need to protect the religion or not?" And there are claims that Wirathu is just a front to a bigger agenda. "He's not just simply a whacky neo-Nazi shaven-head monk running wild. He has the full force of the entire armed forces behind this campaign." As one religious leader points out, it looks like the state is manufacturing the crisis as a way of re-instating the dictatorship. "In my opinion this is just a political game.".
FULL SYNOPSIS
TRANSCRIPT