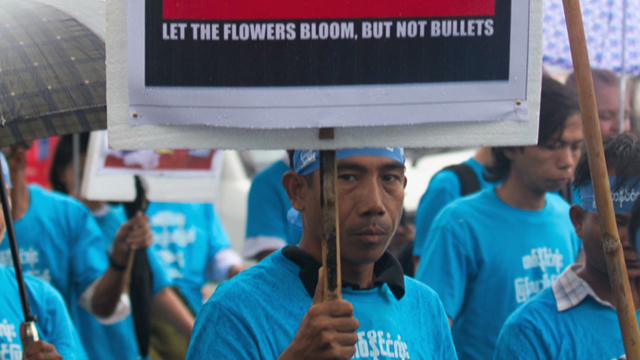 After half a century of brutal military rule, Myanmar is undergoing an impressive transition to democracy. But with ongoing political arrests and ethnic tensions, the country is anxious not to veer off course.

"We dared not speak up in the past. Now we dare to because we have been given the right", says a protester campaigning against land grabs in south-east Yangon. Relaxed censorship has translated into a boom in newspaper readership, comedians free to criticise the government and even a saucy girl band fighting gender stereotypes. But while hundreds of political prisoners have been released, protesters who fail to secure a protest permit face years in prisons. With Aung San Suu Kyi still constitutionally barred from becoming president, many laws need to be rewritten. The President's spokesman openly admits the government's shortcomings. Activist Ko Moe Thwa vigilance is paramount: "the country has changed but we need to watch carefully where this change is leading".
FULL SYNOPSIS
TRANSCRIPT