The shocking return of a mass-murdering death cult 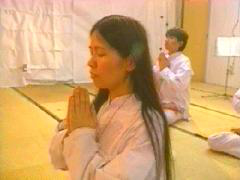 The Aum cult is making a comeback amongst Japanese youth. Will they be allowed to repeat the mass murder of the 1995 sarin attack?

In the suburbs of Tokyo a room full of robed Aum followers kneel in rapturous prayer. It's a scene that would terrify survivors of the gas attack. They're angry that the authorities have not done more to re-educate 'the brain-washed' who are now leading the recruitment drive. Undeterred by the fact that their leader Asahara's transcendental powers have not helped him escape jail, they've carried on preaching. Their last prayer meeting attracted 7000 people, drawn by the cult's new Image complete with disco, Karaoke and their own pop group. In defense, vigilante groups are flourishing wherever Aum followers try to settle. Outside Tokyo an angry mob surrounds a cult house. When the council arrive at Aum's request they are hounded back to their car. Attack victims are urging the government to finally ban Aum before they carry out another attack. Produced by ABC Australia
FULL SYNOPSIS
TRANSCRIPT