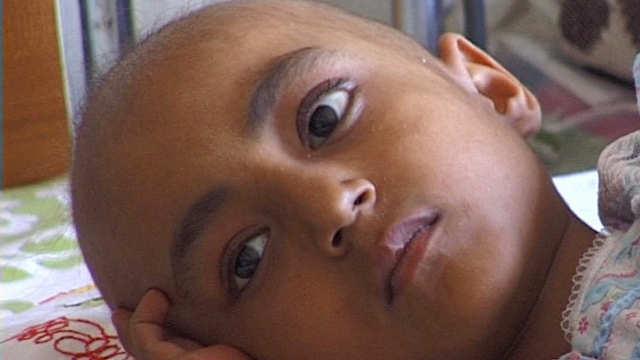 The effects of fallout from depleted uranium shells used in the First Gulf War is a matter of controversy. What is the reality of DU pollution in Iraq?

In the hospitals of Basra doctors are speaking of a crime against humanity. Flicking though his casebook from the last four years, Doctor Abdul Karin shows pictures of babies born without skin, with over-sized heads and with noses where a mouth should be. Doctors here firmly point the finger of blame at the Allies’ use of Depleted Uranium shells during the Gulf War. Over a million rounds of the weapon were fired during the short and decisive round of bombing. Favoured for its armour piercing qualities, a DU bomb penetrates its target with intense radioactive heat, incinerating its victims. “It’s …a flash, bang sort of toaster,” describes Nuclear Consultant John Range. Once detonated DU particles remain radioactive for 4000 million years. Irradiated particles travel on the wind polluting water and soil and entering the food chain. If the Iraqi doctors here are right, the West is responsible for immense suffering. Jisn Mohamed is in hospital for her third caesarean. She’s already borne four deformed babies. “We’ll see what they bring out of me...I’m very scared, in fact I’m petrified.” Lying on her bed after the operation, without painkillers thanks to economic sanctions, the doctors have to tell her that her baby is again deformed and probably won’t survive. British investigators into Gulf War syndrome deny that DU could be responsible for the scale of cancers and congenital defects afflicting Iraq. DU in the quantities used in the shells should not, they say present a serious hazard. Tests on British soldiers have produced “no convincing evidence that Uranium represents a hazard to people.” So could the reasons for Iraq’s health problems lie elsewhere, including Saddam Hussein's own use of chemical weapons? We speak exclusively to former head of Iraqi intelligence Wafiq Samarrai. He claims that Saddam is using the issue of DU as propaganda, to arouse international indignation and force the West to finally abolish economic sanctions. Iraq, he says, was already heavily contaminated before the Allies dropped their DU bombs. Chemical weapons were used against Iran and the Kurds in the North. But with government minders following every move in Iraq it’s difficult to get to the truth. Depleted uranium has now been used in the heart of Europe. The same questions about cancer rates and birth defects will soon be being asked in Kosovo. And the true danger represented by depleted uranium is set to become an increasingly controversial topic. Especially if it turns out that the West which has accused Saddam Hussein of amassing weapons of mass destruction, has itself used radioactive and chemically toxic weapons against Iraq. Produced by ME TV
FULL SYNOPSIS
TRANSCRIPT
SHOTLIST