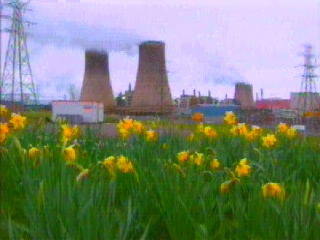 More than 30 countries use nuclear power and all of them have a problem with their waste. Added to the Cold War legacy of over 100,000 decommissioned warheads and it's a problem that needs a grand solution. A solution as big as Australia's Victoria Desert.

A British, Swiss and Canadian company want to build one single repository to house 20% of the world's most toxic waste. And the Great Victoria Desert is one of the few geologically suitable places to do it. "There's no safer place in the world to make the world a safer place," Pangea's advert proclaims. The scheme has appalled Australians "We're not interested in being the world's nuclear waste dump," says Senator Nick Minchin, Australia's Minister for Industry and Resources. For now, the Australian government says it won't meet with Pangea representatives. But they're under increasing pressure to give serious consideration to such a proposal. The US is increasingly favouring the Pangea plan. Nuclear disarmament has left them with something of a 'loose nuke' problem. "There are hundreds of tons of this material inadequately protected... when it only takes a few kilograms to make a bomb. That's what we wanna take care of", says the White House adviser on disarmament. Stashing it away in huge underground nuclear repositories is already a plan vetoed by the government. Fifty kilometres from the Nevada test site lies America's Yucca Mountain dump. Kilometres of tunnels stretch below the earth lined with radioactive steel and concrete canisters - their contents deadly for hundreds of years. But the Yucca project has already cost $10 billion and it will be another two years before the government decides if it's safe to store more waste here. The thought of a less controversial dump in Australia is a far more attractive solution. But while Pangea are keen to publicise itself as a solution to nuclear non-proliferation, it's the commercial interests of the nuclear industry that are central to its agenda. British Nuclear Fuel are 80% shareholders in Pangea. Sellafield Power Station, Britain's biggest nuclear concern, have made reprocessing the worlds' spent fuel rods their multi-billion earner. Waste presents a serious limit to growth, and in the densely populated UK, as in most of Europe, there aren't any convenient remote deserts or mountains to stash it in. A dump in Oz is the perfect bailout for the nuclear industry and a perfect way to justify their continued existence. Produced by ABC Australia
FULL SYNOPSIS
TRANSCRIPT