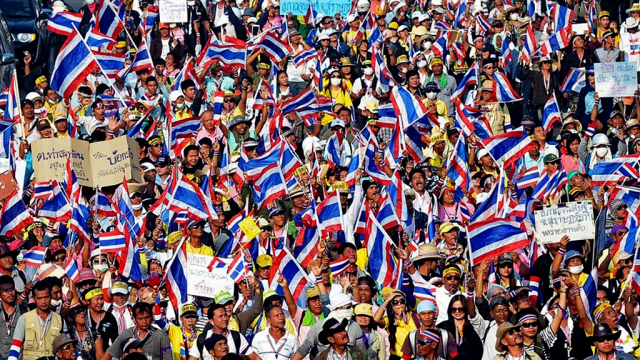 As the number of deaths and injuries in Thailand's violent unrest continues to rise, there seems little sign of an end to the anti-government protests. Can Shinawatra bring peace to this divided nation?

"You think this fence can stop us if we really want to get in?", threaten a group of protesters outside Bangkok's government buildings. After the collapse of the government's multibillion-dollar rice subsidy scheme, thousands of angry farmers are now joining the anti-government protests. Grappling with debt, dozens of farmers committed suicide in less than a week. "People from all walks of life are protesting against the government. Even public servants", argues protest leader Suthep Thaugsuban. New elections failed to pacify the protesters and on February 18th, enraged by the police presence, the protesters surged forward with their barricades. Outnumbered, the police responded with gunshots killing 11 people. But this did not deter the protesters who are determined to purge Thailand of nepotism and corruption. Boycotts of Shinawatra-owned business have sent share values tumbling. Dodging government bullets, the protesters insist: "We aren't afraid! We're getting rid of tyrants". Produced by Dateline, SBS Australia
FULL SYNOPSIS
TRANSCRIPT