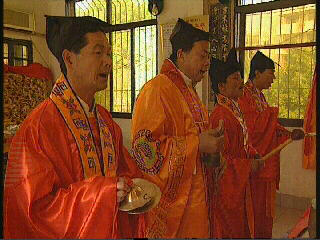 All over China folk religion is experiencing a massive revival.

Housewife and medium Lin Yujin flails as she’s possessed by the spirit of an ancient Daoist god. She’s just one of the thousands of new mediums cashing in on the renewed Chinese passion for everything spiritual. For these people age-old superstition is indistinguishable from approved religion. It’s what families, even Party families have done for generations. But religion or superstition, the Communist Party is intimidated by increasing numbers of open followers. “We do not agree with fortune telling” says a Party official, “It’s…destabilising”. Without the iron rice bowl of communist times past, it seems insecure Chinese are desperate for the luck of the gods. Produced by ABC Australia
FULL SYNOPSIS
TRANSCRIPT