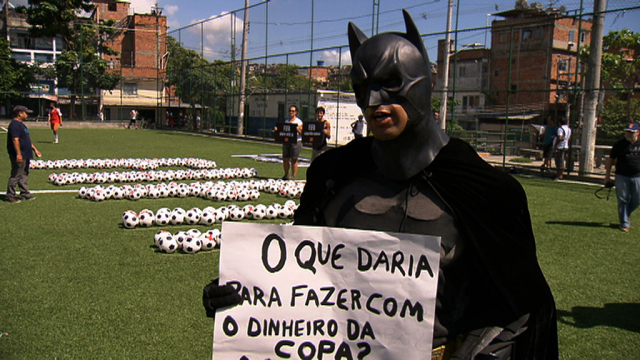 The looming World Cup should be a dream come true for football-mad Brazil. Instead there is surging discontent across the population as protests, poverty and police violence have made it a crippling burden.


"We want hospitals! No to FIFA!", an angry crowd chants. The Maracana football stadium cost $500 million to renovate. Next door, in one of Rio's most dangerous favelas, residents are furious they "still have problems with water, electricity, sanitation". More than 25% of all Brazilians live in the favelas. Economic expansion has created a burgeoning middle class, but the average worker still earns less than $2 per hour and 70% still lack health insurance. 'Clean-up' operations in the slums have been brutal and ineffective, with 21,000 families forced from their homes in recent years. "As FIFA looks out for its sponsors, we are governed by crooks. It's absurd."
FULL SYNOPSIS
TRANSCRIPT