Blood On The Cross 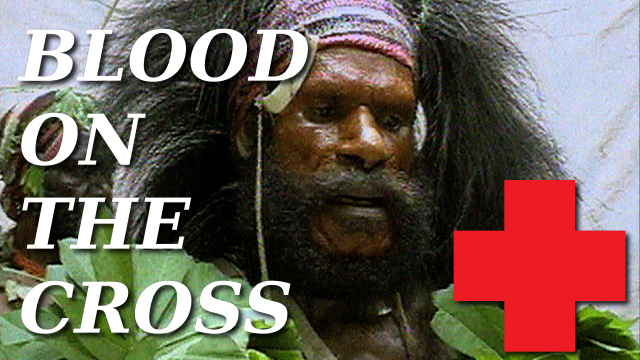 Deep in the rainforests of West Papua a story is emerging of a brutal massacre of innocents.

Piecing together the evidence from Jakarta, London, the Middle East and Geneva this major investigation reveals how the International Red Cross, the British military and South African mercenaries came to be involved in the murder of civilians. In May 1996 a Red Cross helicopter swooped down onto the Highland village of Geselema in the rainforests of West Papua or Irian Jaya. In grass skirts and ceremonial penis gourds the people of the villages ran to watch the envoys land. They were due to meet with the Free West Papua guerrillas, or OPM, and continue their negotiations for the freedom of Western hostages. But on this day Papuans report that white soldiers and Indonesian troops burst out of the helicopter and opened fire. Through the green lens of British surveillance video the figures of Papuans can be seen running away. So why was a Red Cross helicopter carrying soldiers? What were white soldiers doing attacking Papuan civilians? And why three years later, have the Red Cross still not fully investigated the incident that has associated their emblem with the murder of innocents? The story begins with the 'Free West Papua' independence movement, or the OPM guerrillas as they're more widely known. With intimidating nose bone and head-dress, the leader of the OPM, Kelly Kwalik, orates to his people. "I am a true patriot fighting for my country...I regard Freeport mine and the government and military of Indonesia as criminals!" It is the first time any journalist has reached the hide-out of the rebel group and interviewed its leader. He speaks of killings, kidnaps, rape and torture by the Indonesian army and mysterious white soldiers. A campaign of intimidation that began over 20 years ago when the OPM attacked Indonesia's single most valuable asset - the Freeport gold and copper mine. In Kwalik's mind the armies of the world would come to his people's aid if they knew what was happening. Into this setting came a team of biologists. Kwalik thought he had found a way of getting his message out. He kidnapped four Indonesians researchers, four British students, a German and a Dutch couple. The ICRC took over negotiations for the hostages' release. For months they landed in their white helicopter in OPM territory as they negotiated with Kwalik. The OPM's terms were straightforward: get the media in. But the ICRC did not, the cameraman and dignitaries assembled on the agreed release date were just ICRC staff. Duped and disillusioned Kwalik's speech turned angry..."Even though we wear penis gourds and torn shirts, we have the brains God gave us all." The hostages were not released. The ICRC team departed. And that's where accounts begin to differ... According to key ICRC negotiator Sylvianna Bonadei, the team agreed to return and continue negotiations. That's what the Papuans say. But the official ICRC version is dramatically different. Speaking in Geneva, ICRC representative Jean Michel Monod says the mission was over and "...they were all on their way back to Jakarta." A position that conveniently sloughs off any ICRC responsibility for what happened next. The withdrawal of the ICRC, without notice to the Papuans, gave the military a unique opportunity: the chance to send in a Trojan horse draped in a Red Cross flag. On the afternoon of May 9th, the Indonesia Special Forces landed in Geselema and began firing at will. But who were the white soldiers who fought beside them? In a frank interview Nick van den Burg, the former chief of Executive Outcomes admits he had a team of mercenaries in West Papua at the time. Ivor Helberg, ex-British SAS veteran, explains the British role as 'military advisers' but denies they were involved in the attack. Yet it's curious that Britain has displayed virtually no interest in discovering what really happened. Back in the OPM's hideout an elder trains up village boys with bows and arrows for combat training. The time has come to stand up to the invaders. "All the black skins in this place are saying the same thing." There is little doubt that they are going to attack this year, and there's little doubt they'll be slaughtered. But if the world hears of it at all, it will be just another rumour from the jungle. Produced by Hobo Media
FULL SYNOPSIS
TRANSCRIPT