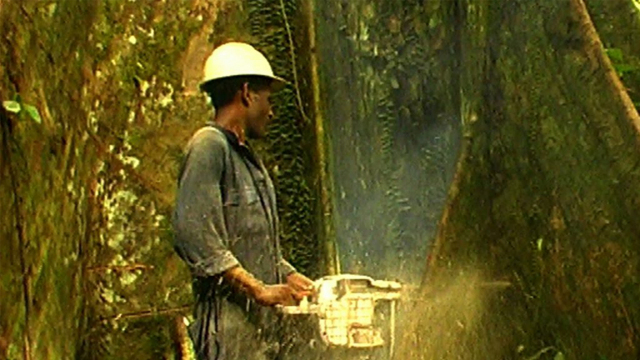 We examine the opposition to logging in Papua New Guinea, as international corporations stake their claim - often without the indigenous people's consent - on the rapidly disappearing forests.

The bureaucrats in Port Moresby have sold logging rights without consulting vast numbers of landowners. Thrusting spears at the camera, the warriors of Maisin practise the fierce welcome they plan to give the loggers. "We will just have to kill everybody around this place", says Vaso, a clan elder who still hopes to keep the loggers out through the courts. He's not defending a poor life he says, "development has to come" but "if there's development the Maisin people have to initiate it." Plenty of others though have welcomed the loggers. The Kosuwa hunter-gatherers signed on the dotted line, yet still without the promised roads and clinics they're sorely disillusioned, "the company bullshitted us." Greenpeace want cashed-up NGOs to step in and stop the deals. But if the rate of logging persists they've got just 15 years left. Produced by ABC Australia
FULL SYNOPSIS
TRANSCRIPT