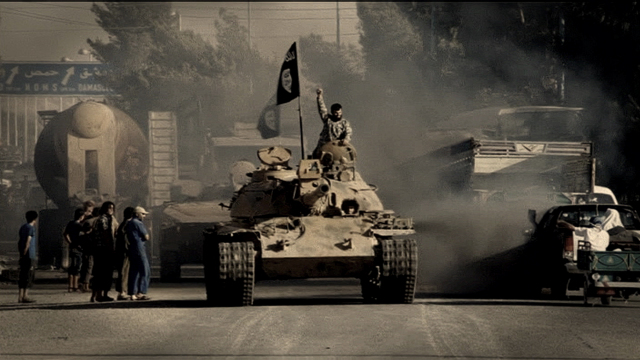 As ISIS take more and more Iraqi territory, this report goes on patrol with a Shia military group preparing to defend the capital. With minimal training and equipment, can they withstand the jihadi storm?

"Some of them sold cupboards from their houses or their wives jewelry to buy them", a soldier says, explaining his troops limited gun supply. They have had just 4 days instruction before being sent to the front line. Their peaceful village has become a battleground, with the enemy now just 500m away. Proudly chanting their new name, "Peace Brigade!", these men are fiercely loyal to the anti-US cleric al-Sadr, and they are prepared to do anything to defend their land. One soldier answers the question, "so what do you do?" with a simple, "Suicide belt. For Iraq". From the safety of his home, covered by security cameras, the militia's general knows only too well how vicious this war has become. His legs were blown off in February by a roadside bomb. It was planted by Sunni insurgents whose numbers are now swelling with international recruits. "Fighters come from Afghanistan, from Turkey, Russia, America, Britain, Australia", General Rahman explains. "They are fighters trained in explosives, booby trapping, assassinations, kidnapping and they, in my view, will create havoc in their countries." Produced by Dateline, SBS Australia
FULL SYNOPSIS
TRANSCRIPT