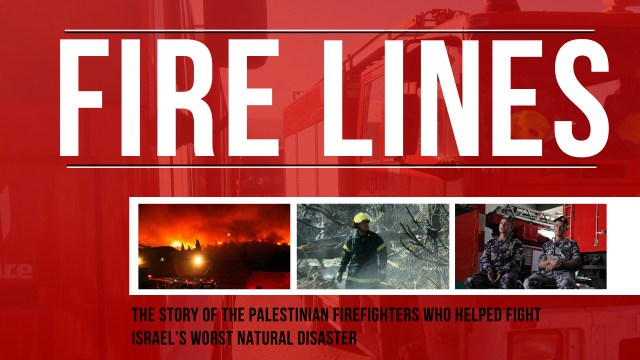 A deadly forest fire tears through the heart of Israel, critically endangering the city of Haifa, and stretching the country's fire service to its absolute limit. To the surprise of many, the Palestinian Civil Defense offers to join the international effort to suppress the blaze. Fire Lines tells the story of the Palestinian and Israeli firefighters who set politics and history aside in order to join forces to battle Israel's worst natural disaster - the Carmel fire of 2010.

"As a firefighter, I felt I should be there. We should be there, because our work, by its nature, obliges us to fight fire anywhere" explains Khaleel al-Baraq, a Palestinian firefighter from the West Bank city of Bethlehem. Many of the Palestinians on the assignment to tackle Mount Carmel's blaze are normally barred from visiting their cultural and ancestral homeland, now in Israel. Yet despite latent resentment of the Israeli state establishment, they step forward and put their lives on the line in the inferno. The principles of fighting fires transcend political boundaries. "Given our humanitarian qualities, our work and experience, we don't differentiate between Jews and Arabs, or Druze, Muslims or Christians", Hamed Armoush tells us. Countering allegations of betraying the Palestinian cause for aiding that of their occupiers, the Palestinian firefighters stand firm in their moral belief that political hostility should not impede humanitarian collaboration. We also meet their Israeli counterparts, who share their gratitude for the international cooperation: "I told them in the simplest terms, 'Take a look at each other and you see our profession. I look at you with pride, at your willingness to come and help.'" We hear the uplifting stories of courageous firefighters from both sides of Arab-Israeli divide, adding a touching human dimension to the seemingly endless military conflict, and teaching us of the potential for interpersonal reconciliation between political adversaries. LEARN MORE.
FULL SYNOPSIS