Land of No Hope 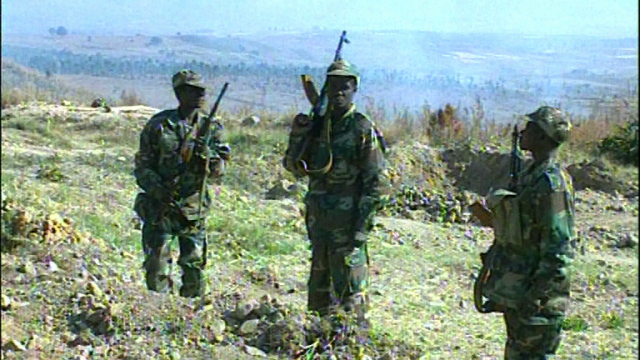 A feature on the Angolan civil war. Angola's cities have become isolated refuges from the UNITA forces, yet even there attacks from the air are frequent. A stranglehold is taking place on the settlements, with little sign of letting up.

In the aftermath of a rare victory against Savimbi's UNITA forces, young rookies show off their victims. "Hey! this guy's still alive", they say, "Let's riddle him with bullets." But for most the bravado is wearing thin. The government has resorted to cordoning off neighbourhoods and press-ganging boys into service. Angola's provincial cities have become islands of government control. Besieged by UNITA, they are the frontlines of the civil war and the end of the line for thousands of refugees. 18,000 of them crowd into Huambo, unable to leave for fear of stepping on a mine or running into UNITA. "We ran away from UNITA because they decapitate people", explains just one of the refugees now totally dependent on the dwindling aid handouts. People run as the bombs fall in Huambo, yet there seems no urgency to their strides. After so many attacks fatalism pervades. UNITA has made the towns centres of crisis to keep the government busy while they get on with the real war of keeping their diamonds. Government ads promise an end to war. "Angola says Enough!" they trumpet. Produced by SABC Special Assignment
FULL SYNOPSIS
TRANSCRIPT