The secret genocide funded by the USA 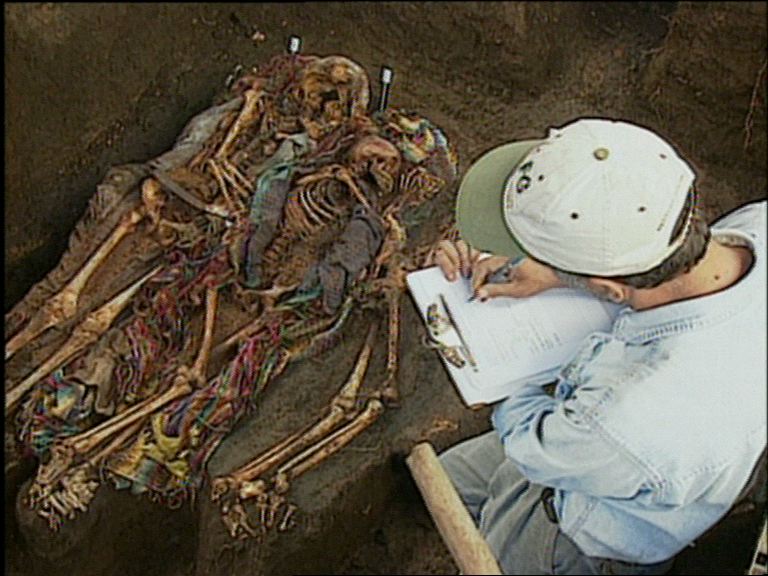 Beneath the lush green hills of Guatemala lie one hundred thousand corpses, the victims of a genocide funded by the US Government.

Around a newly discovered mass grave crowd the weeping relatives of Guatemala's lost generation of Mayan Indians. 20 years ago these Mayan men, women and children were condemned as communist guerrillas and massacred. Until now these killings have been blamed on insurgents and vigilantes. But the army-issue bullets being extracted from these skulls by US forensic archaeologists tell a different story. The 400 newly discovered massacre sites are the handiwork of the Guatemalan Army, but they did not act alone - the CIA told them how to do it. Fearful of Red-spread right on America's doorstep the Reagan administration armed and trained Guatemala's army to stamp-out the communist threat. Veterans of the Reagan administration make no apology for their political agenda. "It seemed clear to us that if you had a Nicaragua in Guatemala, what you've got is... a Soviet style government with secret police agents on the border of Mexico", explains Eliot Abrahms, the then Assistant Secretary of State. Anything was justified to contain the threat, including as is now revealed, turning a blind eye to genocide. Recently released CIA manuals issued to the army explain how to murder people, they even explain how to enter a room with ten people sitting round a table and murder them one by one. These instructions were used against not only guerrillas but countless Indian civilians with Washington's full knowledge. "The well-documented belief that all Ixil Indians are pro-guerrilla has created a situation in which the army can be expected to give no quarter to combatants and non-combatants alike," details one wire from Guatemala to Washington. After analysing the documents released by the CIA on Clinton's orders Kate Doyle is clear that the US are responsible for the horrors perpetrated by Guatemala's army. "The United States created the killing machine that went on to murder and torture hundreds of thousands of people." At a time when Pinochet, Chile's notorious dictator, faces the courts for atrocities, Guatemala is still living with theirs. Over the years 45,000 Guatemalans, guerrillas but also students and professors, priests and social workers - have simply disappeared. Last March, President Clinton apologised for America's support for repressive regimes. But for the relatives of the victims who are presented every day with the gruesome consequences of their country's past, a mere acknowledgement of responsibility is not enough.
Produced by ABC Australia
FULL SYNOPSIS
TRANSCRIPT