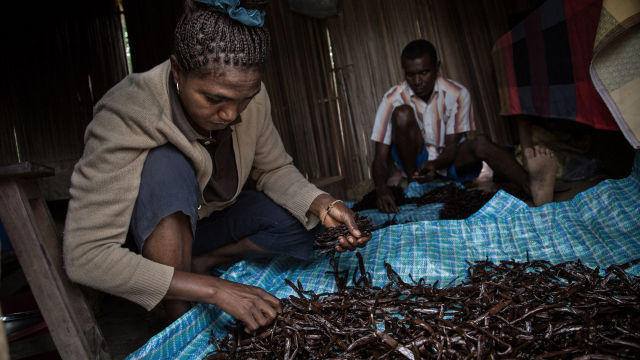 Madagascar, the world's main source of vanilla, has seen traditional farming methods upset by a recent craving for the spice in China. While the Madagascan government stands by, Chinese profiteers wreak havoc on the trade.

Vanilla was introduced to Madagascar by French colonisers in the 19th century, which brought cheap Chinese labour to the farms. Papa Be is a 66-year-old descendent of this first wave of Chinese immigrants. Like his father before him he practises artisanal methods and takes pride in his crop. But his trade is a precarious one. "As growers, we're in the palm of those who have all the money - the owners and the buyers", he explains. Now his ancestral land has discovered a taste for vanilla, which has led to a surge in demand for the spice. Enter a second wave of Chinese immigrants. The new arrivals are business people who control the wholesale buying and export of the spice and profit from cheap local labour. A lack of contracts with workers makes it easy to fire disobedient employees. "That's how you manage workers here", says Cindy, an investor who moved to Madagascar with the second arrival of Chinese immigrants in the 1990s. For President Rajaonarimampianina, who came to power in a military coup in 2009, the unpopular Chinese newcomers are a necessary evil. He needs foreign investment: "Our markets are completely open, and that means China too", he says.
FULL SYNOPSIS
TRANSCRIPT