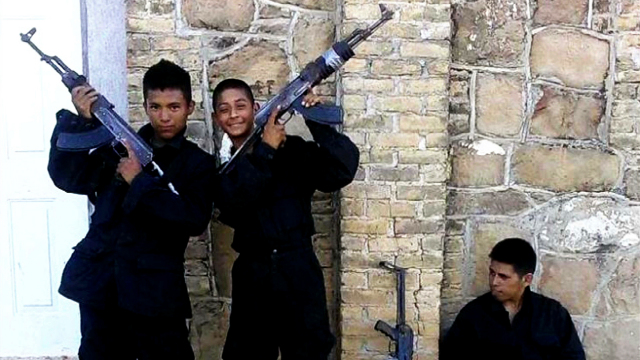 Along the US-Mexico border, the violent cartel gang 'The Zetas' are increasingly recruiting children. This report investigates a terrifying trend in the drug wars that have claimed the lives of over 60,000 people.

"When you drive around you see lots of houses with black ribbons", explains a guide in the border town of Nuevo Laredo. "This means someone who lived there has died. Most of the deaths are young people killed in this cruel war." For decades, hundreds of teenagers have been drawn into the violent world of drug smuggling and murder, sent to the frontline in battles against rival cartels and the Mexican army. "It's easy to pull the trigger. But the moment you do that, your life changes fast. Why? Because you've got blood on your hands", explains a man who joined The Zetas at thirteen years old. Reta, who was trained at a military training camp in Mexico as a teenager, is now serving an eighty year sentence for murder. The fierce reputation of leader Miguel Travino, along with a strong media presence, solidified the image of The Zetas as ultra-violent criminals, idolised by teenage wannabes and feared by many. Now diversion programs have reduced felony crimes in the area by 48%, but for those who were recruited by the gang, life will never be the same. As Reta's ex-wife reflects, "They programmed him to just be heartless, a heartless killer".
FULL SYNOPSIS
TRANSCRIPT