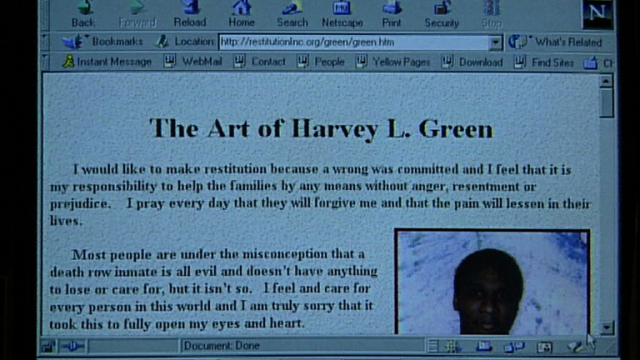 Harvey.L Green, a double-murderer, pleads for forgiveness on his web-site. During the birth of the Internet, an interesting debate unfolds on freedom of expression on the net and on the rights of murderers.

Across the US, wired-up prisoners awaiting execution are talking to the world via the internet. Now the politicians want to pull the plug. At 2am on a Friday morning, double-murderer Harvey L. Green became the 74th man to be executed in the US in 1999. But that’s not the end of Harvey Green. He has an internet web site - filled with apologies and paintings created while waiting his 16 years on death row. "Every man has a right to access information, they access our information… why not put our website on the internet and let them tap into what we've got to say," says Harvey. Technology gave him an existence - and a voice - beyond death row. Is this all a touching example of American democracy in action - or more a case of free expression gone mad? North Carolina Republicans want to ban Green’s site. "People on death row have no rights…people want to know that when you lock up these murderers you throw the key away, that you never have to hear from them again, that's the purpose!" In the first report to examine the deathrow.com phenomenon we assess the implications of political moves in the US to make net access illegal for death row inmates. Produced by Laura Fairrie
FULL SYNOPSIS
TRANSCRIPT