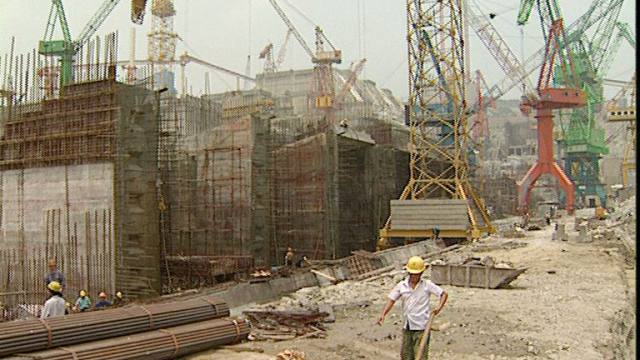 Wedged into the rocks above a secluded ravine hangs the rubble of a collapsed bridge. Foreign journalists are not supposed to see this, the evidence of disastrous corruption surrounding the dam’s hundreds of smaller infrastructure projects. Ironically Beijing is now allowing open criticism of the building fiascos to shame contractors into operating honourably. Given access for the first time, a Chinese TV reporter laughs in amazement as he plunges a stick into a supposedly impenetrable levee bank. A building contractor appointed to repair the levee subcontracted the job, pocketing a proportion of the reconstruction funds. For the people disPlaced by the dam, resettlement compensation is also disappearing. Fengdu City will be drowned in four years. High above the waterline the new city rises brick by brick. But there are no cheap houses being built, it’s all luxury offices & homes. A social timebomb is ticking as peasants are forced off their land into homelessness without receiving the promised compensation money. The bloated Dam project has been the state’s flagship enterprise for years. In the coming months the next batch of resettlement comes online – 125,000 farmers will be moved. It’s just a fraction of the 1.13 million people who will be resettled by the time the project is complete in 2014. Will China’s drive to make a success of the dam prove disastrous for the tens of millions downstream from a shoddy dam? Produced by ABC Australia
FULL SYNOPSIS
TRANSCRIPT