Part-retrospective, part-visual document of the life of conceptual artist Ulay and his illness 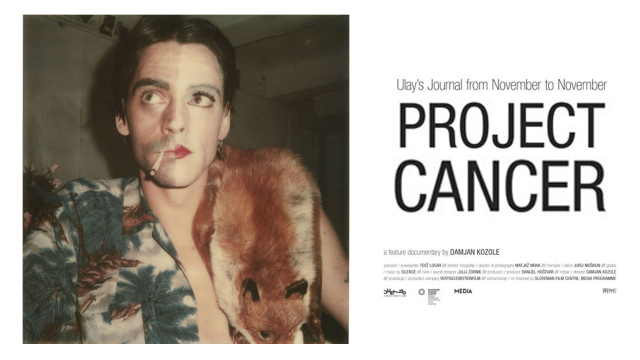 Ulay is conceptual artist Frank Uwe Laysiepen, whose photography pushed the boundaries of the medium, and whose love affair with Marina Ambramovic produced some of the world's best-known examples of performance art. Diagnosed with cancer shortly after agreeing to film the documentary, Ulay's illness informs Project Cancer, which is part-retrospective, part-visual document of the year he believed could be the last of his extraordinary life.

"The way he lived his life is really the way he lived his art." The date was February 1976. Ulay walked through the revolving doors of the Berlin's Neue National Gallery. When he left moments later, it was via the emergency exit and he was carrying Carl Spitzwerg's "The Poor Poet" under his arm. He was faster than the security guards and made it to his car. He then drove to Kreuz where, in the home of a Turkish family, he replaced a reproduction of Spitzweg's work hanging on the wall with the original. Looking back, he explains that he chose the painting, a favourite of Hitler's, because it is "a German identity icon" - symbolically relocated in an immigrant home. "This was the beginning", Marina will remark years later as she and Ulay return to the Neue National Gallery. She accompanied Ulay that day in 1976 and, using a Super 8 camera, filmed the theft. Known as "There is a Criminal Touch to Art", the visual document is an early example of Ulay's polemic and challenging work. From the start, his passion for photography and the Polaroid in particular challenged the viewer, featuring transvestism and self-mutilation as ways to explore identity, often with Ulay himself as subject. Later, the installation Fototot saw photographic exhibits dissolve into nothingness before the spectator's eyes, leaving a haunting impression of the ephemerality of the medium, and of memory itself. In "Talking About Similarity" he sews his lips shuts with a needle and thread, on camera. "Incision" featured Ulay, naked, fixed to a wall by a stretched rubber cord, repeatedly throwing himself at the public, restrained only by the cord's elasticity. Whether in photography or performance art, the limits of the physical body - his own and others' - are explored. "The body is the medium par excellence"", Ulay is fond of saying. Now that his has been invaded by illness, which threatens to consume it, it is time for reflection, for farewells, and to remember a life dedicated to art. Project Cancer does this with humour and profundity.
FULL SYNOPSIS