The Hand Of Franklin 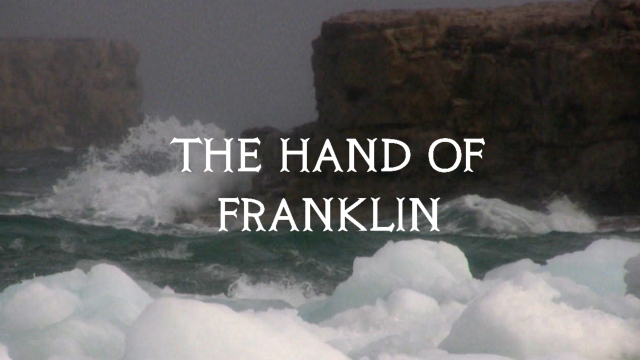 As the Arctic Joule heaves through clearing sea mists, a haunting sight appears on the horizon, the frozen figure of an extended fist, emerging, as if from thin ice. It is the hand of Franklin, a sight few mortal souls have glimpsed since 1845. But now, courtesy of climate change, our band of intrepid explorers is able to share this otherworldly phenomenon with the world.

Capturing such a strange occurrence on film emphasises the great changes enacted on our earth by global warming, highlighting the severe consequences this will have for us all. As Paul Gleeson states, "the fact that we can even attempt this legendary route is testament to the fact that our world is changing". Indeed, as recently as 2000 the North West passage was almost completely frozen over, rendering such exploits impossible.
The novelty of the trip informs the team's good humour. The sailors take time out to crack jokes about bad weather and indulge in mid-trip bouts of skinny dipping in the Arctic Ocean. But the voyage is not without its challenges. Our protagonists are under constant threat from fatally changeable sea conditions and dangerous free-flowing icebergs, though they pull through with smiles on their faces.
The educational thrust of the journey is supplied by frequent commentary from representatives of the Inuit and Inuvialuit communities local to the region. The team wishes to trace the Northwest passage's wider history and culture, and there's much more to it than one well-worn nautical ghost story.
What will our team discover and where will this journey take them? In a feature that combines laddish camaraderie with oceanic mysticism, one thing is clear: it takes guts to grasp the Hand of Franklin.
FULL SYNOPSIS
TRANSCRIPT