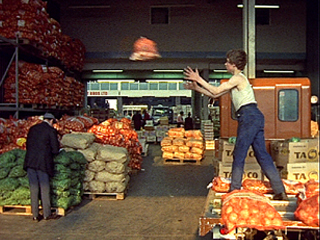 A day in the life of Newcastle upon Tyne...

The Grainger Market is at the beating heart of this film, that was recently rescued from the archives. The council wanted a film about what was going on in the city; the film makers thought they could maybe take the opportunity to make the film they wanted to make about the market. Nobody ended up too happy. Less than keen on the meat being unloaded on the pavement and the preponderance of 'To Let' signs, the council rejected it. "It may be all right for the Straw Dogs generation," one councillor commented. A fascinating portrait of the city at a time of immense change.
FULL SYNOPSIS
TRANSCRIPT