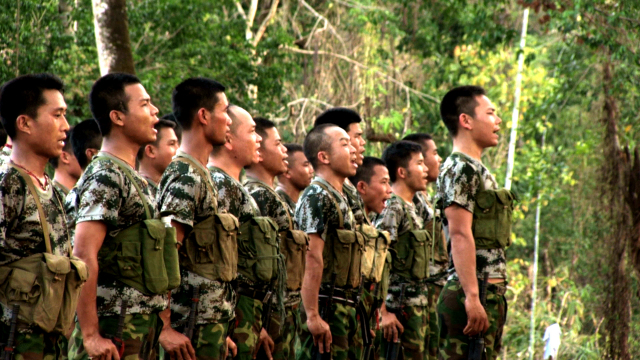 The Taang National Liberation Army of Northern Burma are fighting on two fronts; against the Burmese army and a drug trade allegedly driven by Chinese militia. We meet the soldiers at the forefront of the struggle.

"We are fighting the Burmese army because we are being oppressed. They control everything and they've done nothing for our region, no education, no health, no transport", says the Deputy Commander-in-Chief of the TNLA. Northern Myanmar is home to some of the longest lasting insurgencies in the world. It is also one of the world's main production sites for opium, heroin and methamphetamines. The TNLA have launched an offensive against drug production in their homeland which they suspect is run by the Pansay, an ethnic Chinese militia. "We haven't seen any development in our land. It is all because of drugs. We lost everything", says one soldier. The TNLA battle against the Myanmar government also continues, as they are excluded from negotiations for a nationwide cease-fire agreement. One young soldier explains: "It's time for us to rise up and fight back. I will give my life and die in the battlefield... I am a Taang".
FULL SYNOPSIS
TRANSCRIPT