Revolution: The End of a Dictator 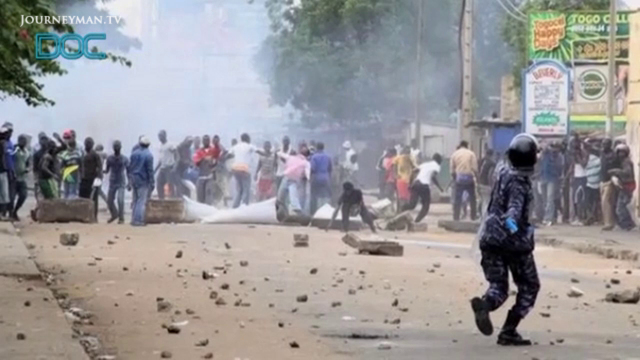 "We told them that the mission was to get Compaore to leave." With these words the youth of Burkina Faso took to the streets and brought an end to the rule of a military junta that had governed for twenty-seven years. One year later and a transitional government is in place, but with many former ministers still in power and the IMF pulling the strings, has revolutionary fervour given way to Realpolitik?

One of Africa's poorest and most underdeveloped nations, Burkina Faso's uprising has inspired similar events in neighbouring countries. At the heart of this movement is the towering legacy of Thomas Sankara, a fierce revolutionary and progressive president whose assassination at the hands of Blaise Compaore remains an open wound in this nation's troubled history. By encouraging solidarity between African nations in refusing to pay their debts to Western creditors, Sankara invoked the fury of colonial powers such as France. Extraordinary footage shows the leader making this case, a plea he knew would lead to his death if left unanswered. The legend of his struggle is kept alive by activists and educators who seek to inspire future generations with tales of Sankara's ability to speak truth to power, and his solidarity with the poor. "Today, everybody is Sankara. If you want to kill Sankara today, a hundred Sanakara will come again." So says a school teacher, who appeals against the government's ban on pupils visiting Sankara's grave. With politicians struggling for power, and the IMF opposing structural regime change, it is difficult to say whether Burkina Faso has undergone a revolution or merely a changing of the guard. What is clear, as this film reveals, is that the Burkinese youth are engaged, mobilised, and hungry for change.
FULL SYNOPSIS