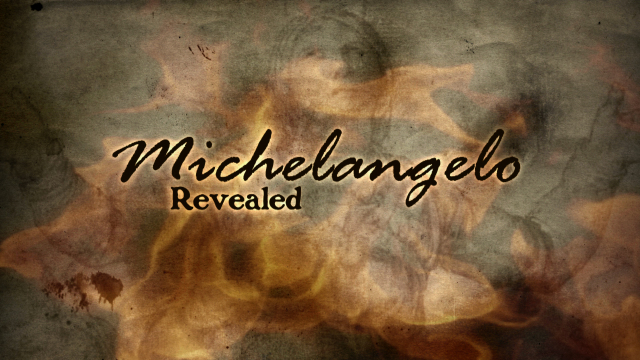 Following the investigations of art historian, Antonio Forcellino, this documentary sheds new light upon the shadows of Michelangelo's dark past and his volatile relationship with the Vatican. When the task of restoring one of his masterpieces uncovers a long dormant string of clues, Forcellino is set upon a trail to discover the truth about Michelangelo's religious beliefs and the tensions of his relationship with the papal institution.

February 18th, 1564. Michelangelo, one of the greatest Italian sculptors of the High Renaissance, dies. Three days later his corpse disappears, just before his workshop is raided by agents of the Vatican; yet all of his papers, letters, and sketches have already been burnt. What was the old master attempting to hide? Or rather, why were Vatican agents trying to expose him? Such suspicious circumstances are only now being explained through the recent discoveries made by art historian, Antonio Forcellino. In this gripping documentary, we follow his investigation into the Roman archives, uncovering the dangerous alliances and religious inquisition which surrounded this famous artist. While undertaking restoration work on one of Michelangelo's masterpieces in the Church of San Pietro in Vincoli, Rome, Forcellino discovered inexplicable imperfections on the most famous central figure of the tomb, that of Moses, hidden under years of dust and dirt. On closer inspection, this impressive monument, visited by hundreds of tourists each year, contains clues to Michelangelo's secret life amongst the clandestine society known as The Spirituali. "The story of the group around Michelangelo when he made the tomb became more important to me than the story of the tomb itself" explains Forcellino, as he delves deeper and deeper into Michelangelo's dark past. Michelangelo Revealed takes us back over 500 years to the dangerous political climate of papal Rome, vividly portrayed through dramatic reconstruction. We are thrown into the heart of a fierce battle for religious control between the cardinals, and the resulting injustices of the Inquisition, shedding new light on the angst surrounding Michelangelo's Last Judgement in the Sistine Chapel and his previously shrouded connections to a subversive religious group and persecuted religious beliefs.
FULL SYNOPSIS