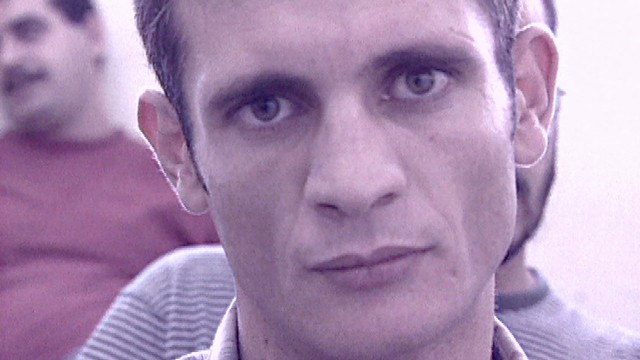 Behind the walls of Khiam prison in Israeli-occupied south Lebanon more than 140 Lebanese citizens are held without trial outside any legal framework.

For seven years Mohmoud Ramadan languished in Khiam Prison - three of them in solitary confinement in a small windowless cell. He was tortured with electric shocks throughout his detention. When he tried to escape his arm was blown off in the minefields surrounding the prison. Today, two years after his release he spends most of his time in and out of a psychiatric hospital. His psychotherapist Dr Hafez keeps a close record of Khiam's broken men. "80% of prisoners from Khiam have psychological problems. They try there to destroy the psychological make-up of the human being." Disturbing pictures from the only journalist ever to enter Khiam bore witness to the brutal treatment. A hooded and bound man stands to receive punishment. Fourteen prisoners have died from torture in Khiam. Some have lost their memory, most have lost their eyesight. Of the 140 prisoners presently detained, eleven are under 15. 14 year-old Ali Tawbee is one of them, He's in solitary confinement and he's told his mother he's receiving electric shocks. Lebanon's Prime Minister is outraged. "Israel has no right to have a prison on Lebanese territory. We find it appalling that the international community has not moved against the very existence of such a prison." Israel itself denies any responsibility for Khiam. It is, they say, under the control of their Lebanese proxies - the so-called South Lebanon Army. But they are very close allies. "Many of my patients have seen and heard Israelis directing the interrogators and giving orders", reports Dr Hafez. On October 28th Lebanese prisoners will hold a hunger strike to close down Khiam. With the peace process rolling they are staking their lives on increasing international resolve to stop the horrors at Khiam. Produced by Julie Flint
FULL SYNOPSIS
TRANSCRIPT