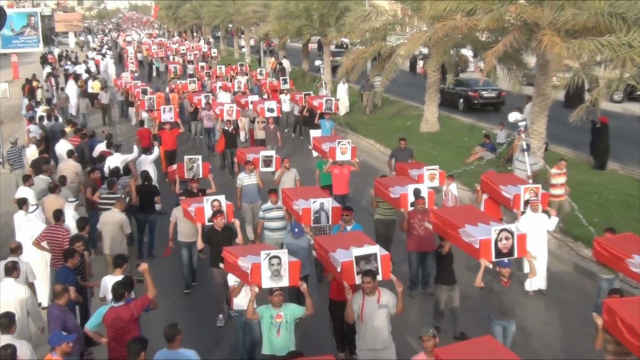 Since 2012, the Bahraini government has revoked the citizenships of its Shia population as a way of suppressing pro-democracy activists. We gain exclusive access to five underground activists to hear their story.

"They want to frighten people. To tell them that if you start talking, this is what'll happen to you", explains Nedal al-Salman from the Bahrain centre for Human Rights. Since Shias took to the streets to peacefully protest for greater political rights from the Sunni regime, life for most Bahrainis has been difficult. By revoking citizenships at random within the Shia majority, the government removes these people's rights to work, healthcare and legal support. "Our life has become hell", says Hussain Khairulla Mohammed, a stateless person. Despite a recent Amnesty report detailing mass arrests, unlawful killings and torture used as tactics to silence dissent, little has changed. "We're living in a huge prison where people can't get from one place to another. There are checkpoints everywhere and there are security forces all over Bahrain", describes lawyer Mohammed Altajer."Most of the people who've lost their citizenship have nothing to do with politics or human rights issues". Shias have become outcasts in their own country, and continue to face discrimination at the hands of an official government policy. Off Centre Productions
FULL SYNOPSIS
TRANSCRIPT