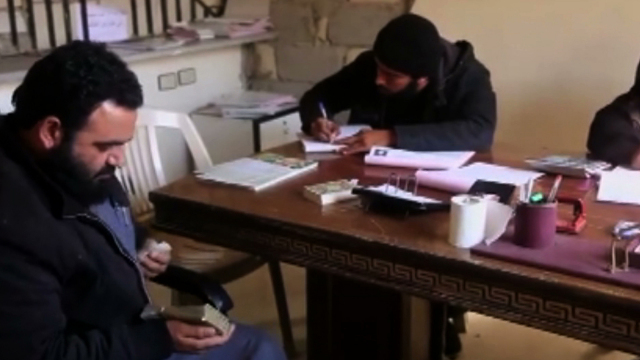 For the eight million people living under ISIS, daily life is increasingly dominated by a terrifying bureaucracy. More than oil, it is extortion, taxes and seizure of property driving ISIS's growing economy.

Refugees fleeing from the so-called Islamic caliphate describe how the barbarism of ISIS is becoming more systematic. One woman in a German refugee centre describes the IS extortion first-hand: "You have to pay taxes for everything - for your motorcycle, a marriage or birth certificate, water, electricity. No matter what". Those who do not comply with these rules are simply killed. Newspaper reporter Christopher Reuter is an expert in the structure of ISIS in Syria and Iraq. In contrast to the image of ISIS as an uncivilised 'death cult', Reuter argues that they have established a modern civil service capable of sustaining their territorial ambitions. This view is shared by terrorism expert Loretta Napoleoni, who believes ISIS is more professionally organised than the West realises. "The biggest mistake that the West is making today is that IS is acting as a state." Leaked budget papers from Syria reveal the extent to which ISIS is financed through the systematic exploitation of civilians: 44.7 percent compared to only 27.7 percent from oil sales. If true, this "loot economy" will significantly limit the effectiveness of air strikes in halting their expansion. Is it time we reassessed our understanding of ISIS?
FULL SYNOPSIS
TRANSCRIPT