Back to the Future

Kyrgystan's struggle to emerge from communism 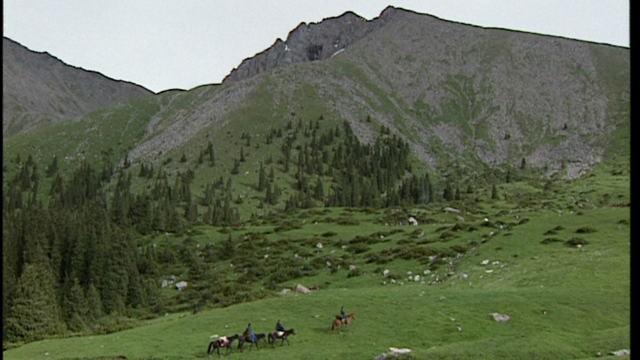 The fall of the Berlin Wall in 1989 hailing the beginning of the end of communism. For the little-known Central Asian nation of Kyrgyztan, the journey is still beginning.

Since their independence from the USSR in 1991, the Kyrgyz have faced the familiar problems of trying to build a new society from the ashes of the old. Living standards have crashed, financial security has disappeared and the former communists appear to have ended up with most of the money and the power. But rather than clamouring for a return to communism they're looking further back into Kyrgyz history. Under an expansive sky, a nomad sends his trained eagle out to hunt. Far from his old Soviet collective farm, the family live one more in traditional Yurt tent living off their goats, horses and sheep who graze the beautiful Tien Shan mountains. "I understand freedom like this, Everyone does his work and is left to his own devices", explains Alamkul. The nation's President believes nomadic values of freedom will deliver them a bright future under free market economics. "From ancient times our people had democratic traditions as nomads", he explains. These liberal sentiments have made Kyrqyzstan a favorite with the IMF opening a flow of lavish praise and substantial aid into its coffers. But for all of the supposedly good reform, the nation is even poorer than it was before. And that, say its critics, is because the government is taking all the money for themselves and confusing the progress with nostalgia. Newspaper editor Zamyra Sydykova insists that President Akayev is taking Kyrgyzstan back to the days of the feudal Khans. "President Akayev is a feudal ruler, he imagines himself as heir to all Kyrgystans's assets", she states. After all, in true dynastic style this is a President who married off his daughter to the son of the President of neighbouring Kazakhstan. "This marriage proves that the rulers are forging these alliances in order to retain the property they took from the people and pass it on to their heirs." And while the trickle-down benefits of market reform fail to penetrate, some are beginning to pine for the communist era. For the picturesque herder in the hills his new freedom is beginning to feel like plain old insecurity "I think life would be better if the Party had stayed. Now there is inequality", he says. "Those who have property live well. Those who don't, can't." Produced by ABC Australia
FULL SYNOPSIS
TRANSCRIPT