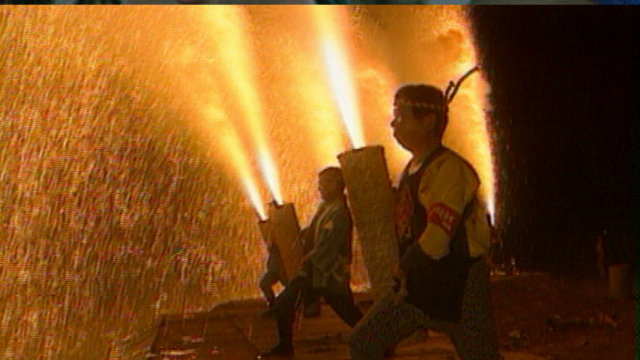 It's big, it's spectacular and it's extremely dangerous, but for the sons of Toyokawa, blowing themselves up is the only way to prove they're real men.


Strolling through a bamboo forest a father and son are engaged in some serious male bonding. "It's pretty big", says 18 year-old Hidetaka in trepidation as his father stops to admire a bamboo stem of grand girth. "Lets take this one", he smirks with menace. Back at home, Hidetaka sets to work packing the pole with huge amounts of gunpowder. In a bizarre Shogun rite of passage he will have to hold it until it explodes. "It's an ancient tradition. Fathers have become addicted to it, it's one of the few chances they get to really communicate", explains one of Toyokawa's elders, who goes on to admit that men have died when the pipes explode. He himself has scars on his head and legs. On the night before the ceremony, his incendiary bamboo pipe prepared, Hidetaka is worried. "I'm scared", he admits in private. His father tells us he'll be all right if he follows his wise instructions. And so in ceremonial dress the town's sons stand in line to perform this ancient rite. Suddenly they become human fireworks lost in a shower of sparks. One by one the pipes explode throwing each man backward in a thirty-second display of splendour that risks life and limb. "My legs are still shaking", stammers a blackened Hidetaka as he emerges from the smoky stage, "but finally my father will admit I'm a man!" Produced by ABC Australia
FULL SYNOPSIS
TRANSCRIPT