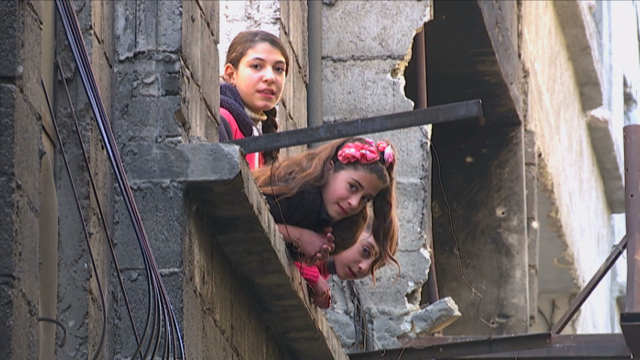 In war-torn Syria, one child in three has developed a mental disorder and two million are without education. This report explores what life is like for children under the Syrian government in Damascus.

"Your homeland is not a motel. You can't change it. It's something in your blood, in your genes", says Syrian journalist and translator Obaida Haamad. The father of two refused to leave Syria after five years of war, and in Damascus we meet many other resilient families clinging to the rubble that was once their home. Syrian Army Colonel Ahmed Zarqa has spent two days at his home in the past fourteen months. "We soldiers will not go back to our families until the smiles return to all the children in Syria", he says. Yet children play in ruined streets minutes from the frontline in Damascus. Nearby, Um Mohamad, mother of eleven children, six of whom are in an ISIS-controlled area, lives in uncertainty. "We don't know what the future holds for us, not even from one moment to the next", she says. With so many children in Syria now living without education, it is left to shelters to occupy the young with something other than warfare. Asked about his dreams for the future, young Ahmed has two plans: "If I don't like being an engineer, I will be an army officer to crush ISIS. Kill them. I want to crush those who chop people's heads off".
FULL SYNOPSIS
TRANSCRIPT