Swapping guns for tools in Mozambique 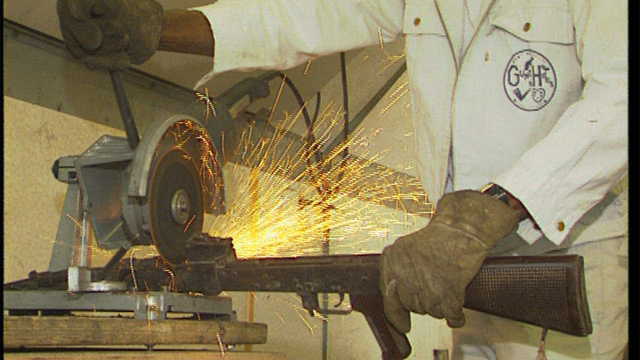 A curious peace dividend is being worked in Mozambique where guns are being transformed into tools. After 30 years of civil war, Mozambique is awash with small arms. Now one locally led aid project is exchanging them for tools.

In the council-run workshop, mountains of surrendered rusty rifles are sawed up and transformed into sculptures: "a chair for politicians" constructed of welded rifles, and a figure of triggers. In return for their weapons people are given spades, bikes and sewing machines gathered from overseas. So far the project has taken 75,000 guns out of circulation. Each trade is encouraging more people to disarm themselves. "The community knows that if you give the gun to the organisation there's something useful you are getting." Francisco is one such man. Like many Renamo guerrillas he buried his weapons believing there would never be lasting peace. Now he feels it's time to cash them in. "I don't have enough money for the family. So, I revealed this stock of weapons." The scheme is proving an excellent antidote to small arms proliferation. Produced by Marion Mayor-Hohdahl
FULL SYNOPSIS
TRANSCRIPT