The infamous story of the postman and gardener who took on McDonalds - and won. An unmissable triumph. 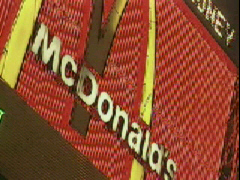 The original inside story of the single father and the part-time bar worker who took on the McDonald's corporation. This 2000 version was followed up in 2005. Find the story of the next five years here:
https://www.journeyman.tv/film/2584/mclibel
Filmed over three years, McLibel:Two Worlds Collide follows the story of Helen Steel and Dave Morris. The lives of these anonymous campaigners changed forever after a day spent leafleting outside their local McDonald's. In their homemade hand-outs they accused the burger giant of, amongst other things, felling rainforests, mistreating staff and serving bad food. All allegations regularly hurled their way. Yet McDonald's decided to take action, suing the small time eco-warriors for libel. It was a fight they'd picked before, and all others had backed down, but Helen and Dave decided to fight the case and prove the allegations against the multinational. The pair turned into unlikely heroes as they stood up in court to defend themselves against McDonalds' crack team of lawyers. Over the course of the trial they faced infiltration by spies, secret meetings with corporate executives, 40,000 pages of background reading and a visit from Ronald McDonald. Throughout Helen and Dave doggedly refused to back down, defending what they saw as their right to free speech. "These are the most important issues I think that any of that any of us face living our ordinary lives. This trial has it all, that's why it's the most important trial this century," so described Britain's top barrister. Culminating in the end of Helen and Dave's courtroom battle with McD's this film hits the emotional highs of the Judge's ruling that several of their allegations against the corporation were valid. BUT they were still found guilty of libel. So the House of Lords will now decide if Helen and Dave can appeal... and then it's all the way to the European Court of Human Rights. Next May, Helen and Dave will appear in court again, suing Britain's Metropolitan Police for giving information to McDonald's. Using interviews with witnesses and reconstructions of key moments in court, the film examines the main issues in the trial - nutrition, animal welfare, advertising, employment, the environment - and the implications for freedom of speech. McLibel is not about hamburgers. It's about the remorseless power of multinational corporations. Produced by Spanner Films
FULL SYNOPSIS
TRANSCRIPT