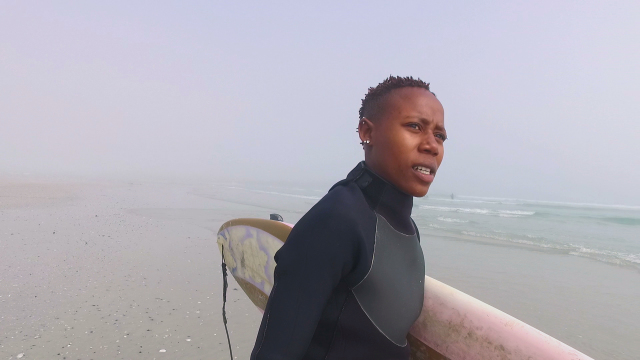 Children in South Africa's Masiphumelele township often experience the worst of violence and poverty. For many, surfing has become a means to get away from the dangers of the slums towards a future of hope.

In Masiphumelele's township of over 30,000, there are few basic services to rely on and injustice is rife. "It kills. It doesn't give any hope - and when you're traumatised you can't control yourself", says nineteen-year-old Noncedo. It was a month before she could reveal that she was raped by a family friend. "I was shocked, I was out of my mind... I felt like there's no moving forward." Stories like Noncedo's were what had inspired travelling British surfer Tim Conibear to found Waves for Change, a surfing initiative now helping 250 children across three South African townships. Formerly the preserve of whites on segregated beaches during apartheid, getting the once confident Noncedo back into the water and onto a board was the most important help Conibear could offer. "It's just a surfing program, what's the depth that we can really go to? he says. But for children in the Cape Flats, half of whom have witnessed a stabbing, the network of adult support afforded by Waves of Change makes it more than just a water-sport. "For me this is freedom. It gives me more hope than I ever had before", says Noncedo.
FULL SYNOPSIS
TRANSCRIPT