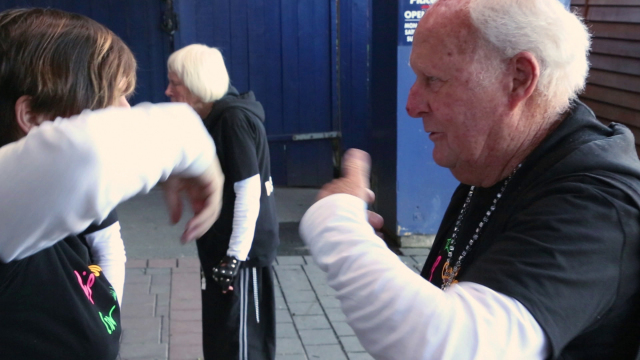 Hip Op-eration are New Zealand's most unlikely new celebrities, defying their age and dancing to the beat. "I've got one new knee, and am deaf as a post", says 96-year-old Kara Nelson, aka 'Kara Bang Bang'.

Founded by Bille Jordan to combat loneliness among the elderly, Hip Op-eration has gone from strength to strength, even performing at the 2013 Hip Hop World Championships in Las Vegas. It's hard to fault their dedication. "We have a pact in the group that if anyone dies dancing you step over them and carry on", says Billie.

"I've got one new knee, and I'm deaf as a post," 96-year-old Kara Nelson tells Amos Roberts. But on stage, she's known as Kara Bang Bang - one member of the elderly hip-hop dance group, Hip Op-eration.

They've performed at championships in Las Vegas and even had a movie made about them.
FULL SYNOPSIS
TRANSCRIPT