The Thai cult cashing in on commerce 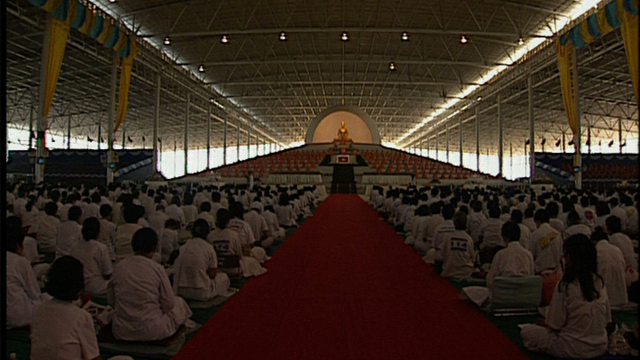 The relentless march of globalisation is challenging Buddhism's place at the centre of Thai society. A new quasi-Buddhist cult more in tune with the global religion of money is proving a huge hit.

At first light every morning Buddhist monks receive the offerings of food from their faithful followers. It's a daily reminder that Buddhism is about foregoing attachment to material possessions. But in the consumer age more and more Thais now want instant Nirvana, and a reassurance that greed is good. And today a new Buddhist cult led by the Abbot of Wat Dhammakaya, is giving it to them. It claims a million followers, assets of $1.4 billion and has just built a new temple embellished with a million bronze Buddha statues. What Wat Dhammakaya sells is its own brand of meditation and blessings. A young follower enthuses over an amulet sold by the temple promising to attract money to the wearer. He says it worked for him. " Friends just said "It's a miracle!"" The temple's popularity is growing through a successful blend of TV evangelism, pyramid selling and intimidation of opponents. And this is despite charges against the Abbot for embezzlement and fraud. Devotees obviously like the Abbot's twentieth century approach to ancient wisdom. Produced by ABC Australia
FULL SYNOPSIS
TRANSCRIPT