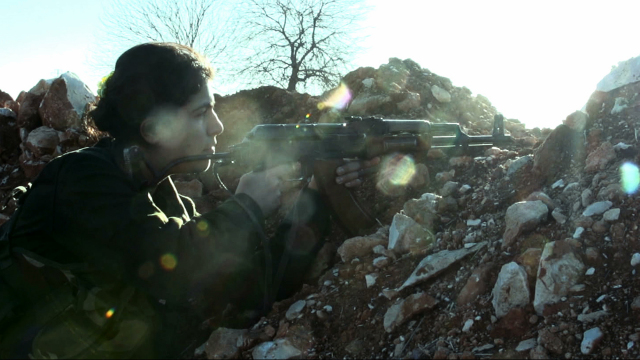 Filmed during the battle of Kobanî, this report reveals the women at the heart of the fight against IS. With stoical perseverance and the aid of American airstrikes, these women are leading the fight for freedom.

"There is this saying in Kobanî that women are no good." Meryam, commander-in-chief of all Kurdish units, explains the prejudice that women have historically faced. "I don't think anybody dares to say this now." Kurdish women have played a major military role in the battle to defend Kobanî against the so-called Islamic State, and proved themselves every bit as capable as their male counterparts. "The women nobody had confidence in, wrote history here in Kobanî", she tells us. This gripping report follows a Kurdish women's unit, providing remarkable insight into their struggle, as well as the alliance they have built with US forces. Meryem coordinates her own troops along with airstrikes provided by American F-16s, in the Kurdish fight for freedom from ISIS.
FULL SYNOPSIS
TRANSCRIPT