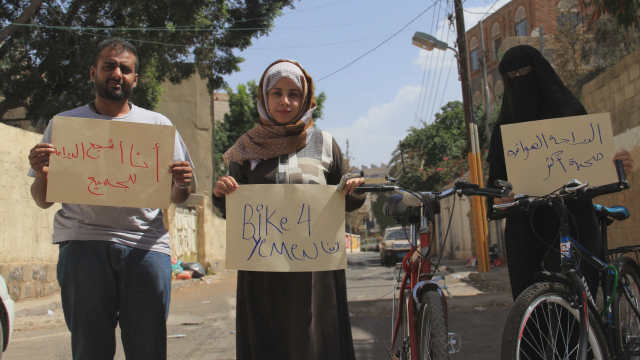 In war-torn Yemen, in 2015, a country with deep reservations about women, photographer and women's rights activist Bushra Al Fusail held a women's bike ride. She never predicted the ongoing attention it would gain.

"Within an hour, the pictures reached 17,000 persons", says Bushra. In conservative Yemen, something as innocent as women riding bicycles causes an immediate uproar. The photos feature on all the news outlets and are widely and fiercely discussed. "This phenomenon is against our customs and traditions", exclaims one angry commentator on Yemeni news; the news channel itself refers to it as "unprecedented boldness by ladies that broke taboos". As the story spreads, it draws international attention and a diaspora of Yemeni women show their support online. Bushra faces criticism at home, however, especially given the circumstances; but she hopes the present crisis will at least provide an opportunity for change. "I think if we want to change the society, it's during the war."
FULL SYNOPSIS